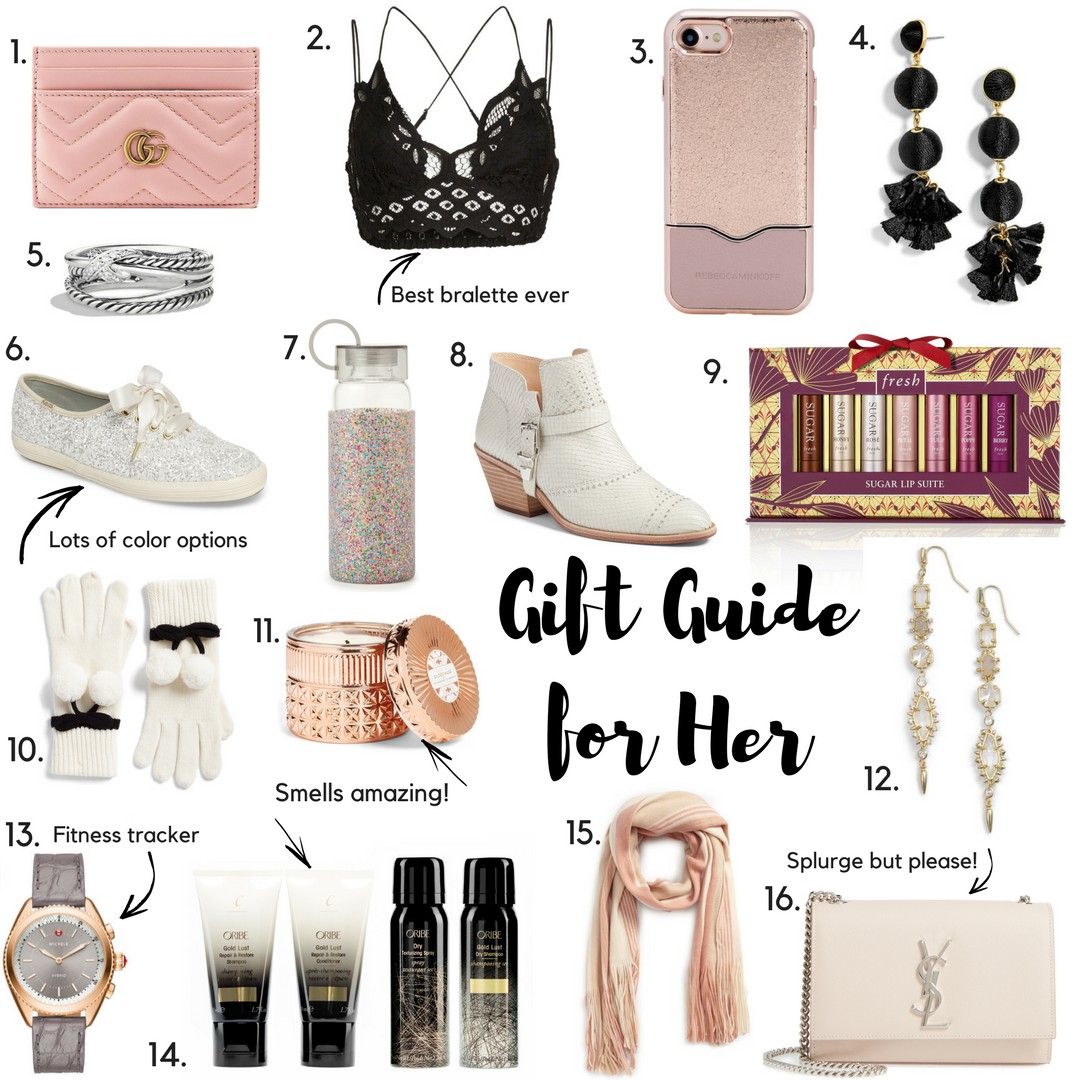 GIFT GUIDE FOR HER DETAILS:

Happy weekend friends! I’m kicking off my gift guide series with gifts for her! Christmas always approaches so quickly, and I always procrastinate on my own gift shopping and providing my mom and husband with a wish list for myself. One of the pros to having my blog and reasons I’m starting with this gift guide for her, is not only to save you time when creating your perfect wish list, but also help my mom and myself out. I keep finding so many goodies I don’t know how I’m going to narrow it down to a few gifts for my mom and sister. What are your top picks from my gift guide for her? Before you decide, let me share some of the reasons why these made it to my favorites!

This card case is adorable. The full size Gucci wallets can be pretty expensive so why not start with a card case in a fun color that you can easily throw into your clutch that won’t fit a large wallet.

I wear my Free People bralette all the time. There are so many great color options, I have black and pink. This phone case is so glam, and I love it. Anyone else feel like they get a new phone just by changing your phone case?

Baublebar has my favorite earrings and these pretties are no exception. I couldn’t wait until Christmas so I ordered them today. Whoops!

I love David Yurman pieces. They’re so classic and timeless, just like this ring. And oh my goodness, these Keds for Kate Spade sneakers are all the sparkle I need in my life. I can’t decide if I love the black or cream more. Speaking of sparkle, everyone needs a glittery water bottle in their life, right?

I’m so obsessed with these Vince Camuto booties, I ordered them in black and white. I promised Tyler I won’t keep both though so help me pick! Fresh lippies are my fav. They make your lips feel so soft and have the perfect amount of subtle color.

If I still lived in Chicago and needed gloves, these would be at the top of my list. I’m obsessed with anything with pom poms. You can always find a capri blue candle in my house. I’m in love with the rose gold design on this one. It would be the perfect hostess gift.

Kendra Scott pieces always make their way to my wish list. These gold beauties from their winter collection are at the top. Did you all know Michele watches has a hybrid watch and fitness tracker option? I did not until last night, and I’m so excited! I’ve been hoping something like this would come out.

If you want your hair to smell and look amazing, you need some Oribe products in your life. This set is a great introduction to their products if you haven’t used them before. I couldn’t recommend the dry texturizing spray more!

I love getting cozy scarfs for Christmas. This Free People one has fringe detail that I love, and it’s in my favorite color. Lastly, I had to include my splurge pick. It’s so timeless and will go with everything.

What will you be adding to your wish list? Hope you enjoyed checking out my gift guide for her! Let me know if there is a specific category you’d like me to make a gift guide for.  As always, thanks for stopping by! xoxo

Previous Post: « Holiday Cream Sweater Dress with The Mint Julep Boutique
Next Post: The Best Gifts for the Beauty Lover »